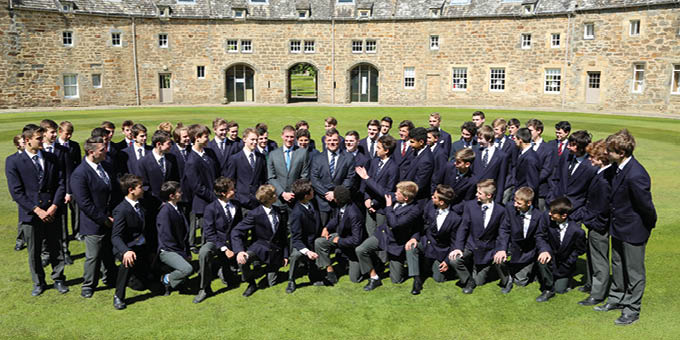 Gordonstoun may have a stellar academic record, but it’s the school’s emphasis on character building that sets it apart from other top-tier schools. Gordonstoun has never focused exclusively on exam grades – the school also dedicates itself to helping young people develop the social, emotional, and cultural awareness they need to become well-rounded young people who excel in higher education and thrive in their chosen career paths.

Here are seven examples of how Gordonstoun teams its academic curriculum with character-building education.

Sailing is an important part of education at Gordonstoun. The school owns an 80-foot training yacht, The Ocean Spirit of Moray, which pupils sail in several expeditions. Of course, these aren’t just pleasure trips. Pupils crew the ship, contribute to its upkeep, and even take lessons aboard. Gordonstoun’s sail training helps pupils develop leadership and teamwork skills, which is why seamanship training is compulsory for all students from Year 9 onwards.  In senior year, pupils can experience a once-in-a-lifetime trip to the Arctic to see how climate change is affecting this delicate ecosystem.

Students set off on expeditions on land as well as water.  A highly experienced team of outdoor education experts regularly take young people out into the Highlands of Scotland.  They develop the key skills of teamwork, resilience and compassion as they help each other to thrive in a wilderness environment.  Here they learn that the best person in a team is not necessarily the person who is best at rugby or algebra, but the person who can keep spirits high in a storm and who can make a fire and brew some tea to keep everyone warm.

Gordonstoun’s Dialogue Society connects pupils, educators and members of the community to discuss important current issues. The focus of the society is to help pupils learn how to engage in healthy debate and cultivate conversations that take all perspectives into account.  It differs from the debating societies in many schools, where the focus is on winning an argument.  Dialogue uses negotiation skills to reach the best solution for all.

Gordonstoun doesn’t feel that all teaching should take place in the classroom. Instead, teachers often hold classes outdoors so that pupils can spend more time in the fresh air. While Gordonstoun’s younger pupils enjoy activities like picking and classifying leaves and walking to the nearby beach, older pupils learn amidst the school’s expansive green campus and backdrop of Scottish Highlands and Moray coastline.

A 2020 study by the Moray House School of Education at the University of Edinburgh interviewed 1,000 Gordonstoun graduates to see how effective the school’s ‘out of the classroom’ learning approach is. 94 percent of respondents agreed that the school’s approach had a positive effect on their personal growth and development.

Gordonstoun also encourages pupils to volunteer for one of nine local community service organisations. All seniors participate in a community or charity initiative, such as the school’s fully operational fire service. Juniors get involved in other community projects like cleaning local beaches, playing music for elder home residents, and fundraising for local charities.

On top of this, Gordonstoun’s pupils participate in international service projects in Romania, Kenya and Thailand. These service projects give pupils a better understanding of issues that affect those who live in other parts of the world.

Gordonstoun encourages its pupils to take part in the infamous Duke of Edinburgh’s Award, which, although popular around the world, has its roots at Gordonstoun. Schools in more than 140 countries take part in the Award, which former student Prince Philip launched in 1956 with Gordonstoun’s founder and headmaster of the time, Dr Kurt Hahn. Rather than pit pupils against one another, those partaking in the Award work towards individual goals. The programme features a variety of team-based and individual tasks that focus on personal growth and developing self-confidence.

Gordonstoun is one of the founding Round Square schools, a network of 190 schools around the globe that subscribe to the tenets of teaching responsibility on top of academics. Round Square also offers pupils opportunities to attend global and regional conferences and to participate in international service projects.

In 1934, the German-Jewish educator Dr Hahn founded Gordonstoun following his release from a Nazi arbitrary arrest. The school enjoys 150 acres of Sir Robert Gordon’s former estate, after whom the school is named. Today, Gordonstoun employs more than 300 staff for its 500 pupils, giving the school one of the lowest pupil-to-instructor ratios in the UK. In 2019, the school was recognised by Her Majesty’s Inspectorate of Education as ‘excellent’ in curriculum and received a rating of outstanding and sector-leading by Education Scotland in 2019.

Gordonstoun doesn’t focus purely on academic education; teachers also shape pupils into contributing members of society. To this end, the school welcomes pupils of all backgrounds, religions and socio-economic circumstances. Pupils from more than 40 countries attend the school, which is now one of the few remaining full boarding schools in the UK. To support this world view, Gordonstoun’s curriculum includes a compulsory International and Spiritual Citizenship course. This course explores health education, spiritual development, environmental issues, and life skills.

Gordonstoun is famous for having educated several members of the British royal family, including the late Prince Philip and his sons Prince Charles, Prince Andrew, and Prince Edward. Other notable alumni include Jason Connery, the son of actor Sean Connery, and Duncan Jones, the son of musician David Bowie.

What Are the Main Challenges of Student Assessments and How to Overcome Them?

The Positive Effects Of Incorporating Music In Your Child’s Development

How to Get Your Kids Ready to Go Back to School

How to Choose the Right Tutors for your Child?